SVILOVA proudly presents Lisa Tan’s Notes from Underground. The video connects the Stockholm subway, Susan Sontag’s sojourn in Sweden, and a cavern system 5,000 miles away in New Mexico. Varied intensities of geological time and strata of personal and cultural history move through the narration. Suggestively linking experiences of liminality, Notes from Underground lingers in the borderland of human complexity.

A text written by Mara Lee, The Shadow is Just as Tangible as the Origin, accompanies the video. The text was originally published in the book Lisa Tan: Sunset, Notes From Underground, Waves, published by Archive Books and distributed by Anagram Books. The  book serves as a field guide to Lisa Tan’s eponymous video suite.

Lee explores the liminal spaces that permeate Tan’s videos: drifting between day and night, above and below ground, land and sea. An analogous transit is offered by the text: the reader is suspended between the empirical and subjective worlds with the hope of fulfilling the promise held out by the in-between: transformation.

You can read the entire text in the link below: 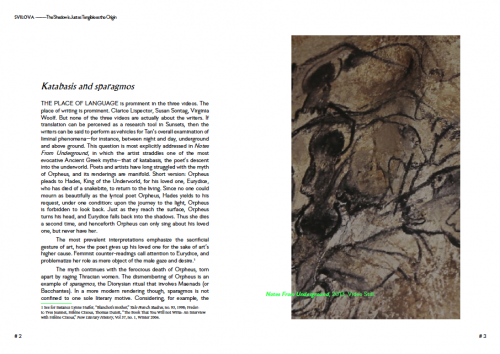 Lisa Tan is an artist living in Stockholm. She received an MFA from the University of Southern California, Los Angeles and a PhD from the University of Gothenburg, Valand Academy. She is currently a guest professor in Fine Art at The Royal Institute of Art in Stockholm. Notes From Underground has been previously exhibited at the Institute of Contemporary Art Philadelphia (2016); Galleri Riis, Stockholm (2015); and the Lofoten International Art Festival, Svolvær (2013).

Mara Lee is a poet, novelist and scholar based in Stockholm. She is the official Swedish translator of Anne Carson. Her novels Ladies (2007), Salome (2011), and Future Perfect (2014) are published by Albert Bonniers Förlag. Lee’s recent scholarly study, När andra skriver: skrivande som motstånd, ansvar och tid (The writing of Others: Writing conceived as resistance, responsibility and time) is published by Glänta. She has written several essays on artists, including Lina Selander and Eva Hesse (“Om Eva Hesse” published by Moderna Museet). She is the recipient of the P.O. Enquist prize established by Norstedts, as well as the Svenska Dagbladet literature prize.