SVILOVA/NSFW  proudly presents an online exhibition with the video work Pick a Persona by Jeanette Hayes.

As an artist Hayes often plays around with the legacy of classic painting. She uses its myths and canon while borrowing and incorporating influences and images from today’s digital culture. By doing so she fuses past and present together to create strong visual portraits of our time.

Pick a Persona is built like a collage, much like her previous video works. She takes snaps from her everyday life (with and without filter), pop culture, anime, and current events that have been chopped up and screwed into a stream- of- consciousness-type of video.

The work is accompanied by a text written by Stockholm based Art Historian Alice Söderqvist. To download the PDF text please click 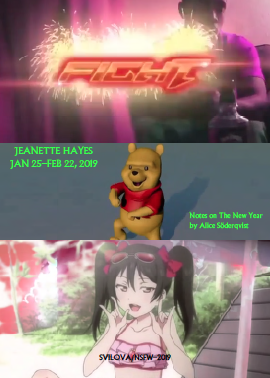 Jeanette Hayes (b. 1988) is a painter/multimedia artist originally from Chicago, based in New York where she received a BFA from Pratt Institute. She has previously exhibited at Half Gallery (New York), the Hole (New York), Bleecker Street Arts Club (New York), M&B Gallery (Los Angeles), Motelsalieri (Rome), and Castor Gallery (New York).

Hayes has made animated GIFs and videos for Proenza Schouler, CHANEL, Alexander Wang and Opening Ceremony and has done an artist sponsorship with BlackBerry. ID Magazine included her on their 30 under 30 list, Complex Magazine chose her as an artist to watch, the New York Times featured her in their first “Up Next” column and recently Interview magazine did an artist feature. In the last year Hayes has collaborated with Sing for Hope to make a piano for public display and also was chosen to make the artist book to accompany the fall 2015 Purple Magazine. Hayes has made several prints with Exhibition A and is currently working on a book that will be published by innen books.