Light, perception and how we choose to interpret the outside world is a recurring theme in Katarina Löfström’s works.  Her belief in the image’s inherent ability to create meaning, without the use of language/text is apparent in her installations, videos and other 3D works.

In Score (2004), we are met by rows of dots. These grid of points are enlarged from NASA’s  Deep Field– image, taken with the Hubble Space Telescope. It shows the universe as far as we can see with our technology. We don’t know what is beyond it- if there is more information or if this picture shows us the end of it all. Katarina Löfström asks us if this represents the limit to what we can know of our surrounding world. Instead of going beyond she chooses to dig deeper into the copy itself, down to its grid level. What she found was a composition, much like a silent music score that governs our image of the universe.

Katarina Löfström (b. 1970) received her MFA from the University College of Arts, Crafts and Design in Stockholm and works primarily with video, digital animations, audio interactivity, and sculptural installations.

In the late 1990s she worked with Swedish commercial film with director Jonas Åkerlund, scripting pop videos for amongst others Madonna, Prodigy, Moby and Metallica. Löfström then continued into the 2000s to run Club Bevil together with DJ Linus Winstam. Their aim was to show art, street art and music in unexpected places. It was also during this period that digital animations such as  Hang Ten Sunset and  Whiteout were produced.

As part of IASPIS Studio Program she stayed at Künstlerhaus Bethanien in Berlin and began to work with Jan Winkelmann at Winkelmann / Berlin, a collaboration that lasted until 2008. During this time she produced some of her best-known video works, An Island, Tower and Score.  Score was also published as a book and showed in an artist book exhibition in Alexandria (Egypt), curated by Power Ekroth, in 2004.  Löfström’s work have been presented in solo exhibitions at, among others, Index Foundation (Stockholm), Norrköping Art Museum, Skellefteå Konsthall, Malmö Konsthall and Uppsala Art Museum. She has participated in group shows at Witte de With (Rotterdam) and Bonniers Konsthall (Stockholm), and Dome of Visions (Stockholm), to name a few. During 2018 she showed the work Open Source (Cinemascope) at the Wanås Foundation, the work was destroyed during a storm but will be rebuilt in 2020.   In the summer of 2019 she will show the work Open Source (16:9) during the sculpture biennale Blickachsen i Bad Homburg (Frankfurt).

Katarina Löfström is represented by Andréhn-Schiptjenko in Stockholm. 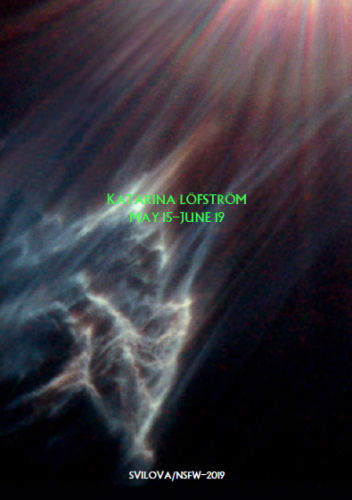