NSFW/SVILOVA is proud to present the film Mother’s Milk by Sophie Vuković. The film is a poetic articulation of a mother-daughter relation, where everyday observations are mixed up with both tender and violent gestures, creating a compelling and thoughtful narrative exploring notions of care. The film centers around the caregiving femme body, always in motion in different forms of reproductive labor in a domestic space. The title Mother’s Milk refers to that which is subconsciously passed on and inherited over generations.

Sophie Vuković is a filmmaker and artist based in Stockholm. Her practice is situated between documentary and fiction, and has previously investigated the construction of identity, intimacy and migration. Her films explore how personal relations and experiences are shaped and affected by social and political structures. Vuković’s films have been shown at film festivals as well as in art exhibition contexts such as the Barbican Centre (UK) and The Moderna Art Museum (STHLM). The film Mother’s Milk (2019) is her thesis work from The Royal Institute of Art and was awarded the Maria Bonnier Dahlin Foundation Grant.

In conjunction with the exhibition the writer and critic Frida Sandström has written an introduction text. To download the PDF text please click here or the image below: 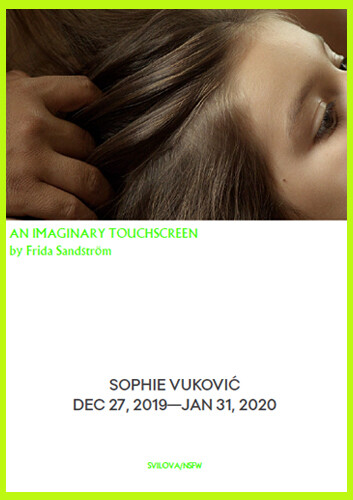 Sophie Vuković (b. 1988) lives and works in Stockholm, Sweden. Her work has been exhibited at Moderna Museet (STHLM), Barbican Centre (UK), Kontshall C (STHLM) and the Gothenburg Film Festival (SWE) among others.