SVILOVA is proud to present First Screening by Canadian poet bpNichol. Originally designed for The Apple IIe (one of the first successful and mass-produced personal computers), First Screening is a set of twelve kinetic poems that unfortunately became inaccessible when the Apple IIe was discontinued.

Distributed on 5 ¼ floppy disks in a numbered and signed edition of 100, First Screening is not only one of the first works of programmed kinetic poetry, but also one of the first examples of digital publication and distribution before the rise of the Internet and other digital distribution platforms.

On the occasion of the exhibition, Canadian artist and author Alex Turgeon has written an introduction text that can be read in the link below. 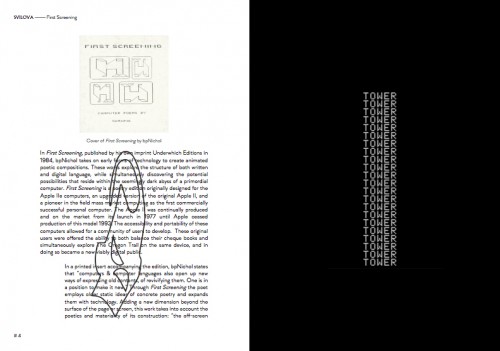 bpNichol (B. in Vancouver, British Columbia, 1944), was one of Canada’s most important poets. In his lifetime he wrote concrete poetry, novels, short fiction, musical scores, computer texts and scripts for the muppet-based children’s show Fraggle Rock. bpNichol died in Toronto, Ontario on September 25, 1988.

Alex Turgeon is a Canadian artist based in Berlin.

*We would like to thank Eleanor Nichol for giving us the right to show online First Screening at SVILOVA.