Reflecting on the visual imagery produced by queer and pop culture, Solano´s intimate and autobiographical work manifests itself in video, performance and painting. All works created from 2014 onwards were produced after the artist became blind for life as a result of an HIV-related infection.

” I grew up a misfit in the suburbs of Mexico City where, from an early age, my gender ambiguity and artistic temperament set me apart from other kids and fueled my impulse to express myself through artistic creation. As a teenager, I realized making art would be my means to bridge the inescapable gap I found between myself and the world. In early 2014, having been denied access to retroviral treatment, I became blind for life as a result of an HIV-related infection. It seemed like I would have to renounce my artistic career dreams to become the kind of blind individual my world expected me to be; but I, a born rebel, determined to make more art than ever before…”

The video exhibition is accompanied by a text written by the artist and professor José Luis Sánchez Rull.

You can read the text by José Luis Sánchez Rull in the PDF link below: 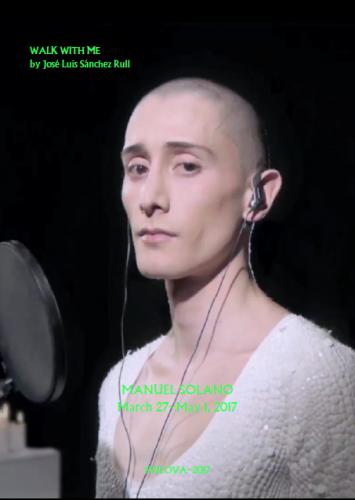 José Luis Sánchez Rull (b.1964) is an artist, professor and performer based in México. He holds a BFA from Pratt Institute (BKLYN N.Y.). He has taught for many years both production and theory workshops at the National School of Painting, Sculpture and Engraving (E.N.P.E.G. “LA Esmeralda”). From 2011 to 2016 he was a member of the National Creators System (S.N.C.A.) Conaculta – Fonca. His work has been shown nationally and internationally, in group and solo and with the collective G:H:E (Gabinete Homo Extraterrestre). Amongst his exhibitions can be included: RADIOACTIVE CEMETERY!!!, Museo del Chopo CDMX 2014/THE FORTRESS OF SOLITUDE, Anonymous Gallery CDMX 2012/THE PROVERBS OF HELL, Iago, Oaxaca 2011 & with the G:H:E:; DESTROY ALL YOUR HUMANITY, The Mistake Room, Los Angeles, California 2017.