Svilova is proud to host the online premiere of the video work EU by the artist Jaakko Pallasvuo.

Finnish artist Jaakko Pallasvuo´s practice manifests itself in video, ceramics, text, and the expanded field of theatre. Exploration on how personae and aesthetics takes shape through life online is a clear starting point through his works. In the video EU, being cool, is linked together with the borders of the European Union and having access to resources. The video begins with a plague brought upon the world and we get to meet a group of people, the coolest of the cool, who managed to save themselves. Writer and editor Elvia Wilk untangles the concepts in her introductory text:

“Cool is definitely not the same as trendy, though it usually coincides with trendy; it intersects with nonchalance; it has a penchant for arbitrary meanness; it contains traces of recklessness and a strong foundation on “being in the moment”; and it’s built on a foundation of not being desperate (which is easier for people with family money or inherited status since cool masquerades as a function of Randian individuality but at least in New York a lot of the time cool people have a famous dead parent and/or a trust fund; you can’t buy cool, but money, ahem, helps) as well as of youth.”

Read the rest of the text in the following link: 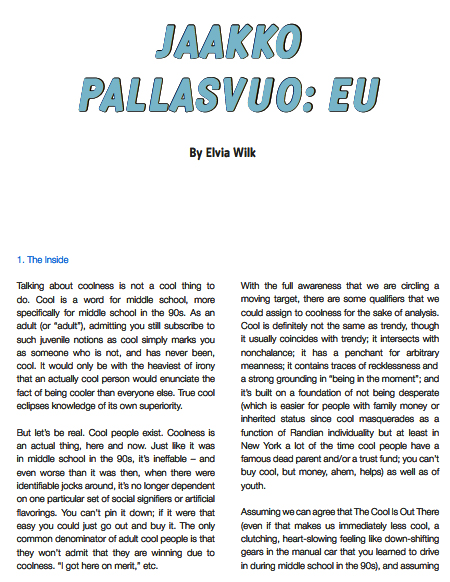 Jaakko Pallasvuo (b. 1987)​ is an artist based in Helsinki and Berlin.​ Pallasvuo​‘s​ work takes various forms. At the moment he is working with texts, videos and ceramics​, while also being engaged with the expanded field of theater.​ Pallasvuo thinks about what online encounters feel like and what kind of social media personae are shaped through them.​ ​In ​recent years ​his​ work has been exhibited at​​ Kunsthalle St. Gallen, Kiasma Museum of Contemporary Art, The Goss-Michael Foundation, Kunstraum Kreuzberg/Bethanien, UCCA, Eyebeam and Future Gallery, among others.